Arsenal’s last match against Newcastle with its late winner was edge of your seat excitement for all Bay Area Gooners who watched. But possibly none more than Kenan Kuntsal who was in the stands at the Emirates Stadium, celebrating his birthday.

This was Kenan’s first trip to see the Arsenal in person, a pilgrimage all Gooners should make at least once in their lifetime. It is certainly not an experience he’ll soon forget.

So while most stateside Gooners were going berserk in the 95th minute in a pub or our living rooms, Kenan was living the  dream.

First of all, if any local Gooner is contemplating a trip: DO IT!  Well worth the travel. The post game crowd is immense. But, I would suggest you do NOT leave early, as evidenced by the many that missed the 95th minute winning goal!

A bit of local knowledge:  the Holloway Road tube station near the grounds is “exit only” after the match so you have to walk to one of the other alternatives. I would recommend finding a pub or restaurant and having a drink after the game rather than stampeding the tube with 50,000 Gooners.

In addition to witnessing a nail-biting finish, Kenan also did the stadium tour the day prior to the match. Didn’t really plan it out, just showed up!  I was really impressed with the access the tour provides. You can sit it the Director’s Box, visit both locker rooms, walk out the player’s tunnel onto the pitch, even sit in Arsene’s seat on the touchline.

Would definitely recommend it. It is by far the most incredible and impressive stadium I have ever visited regardless of sport, and it was fun to see it empty before the game to really appreciate the details of it.

In the Arsenal locker room

The Arsenal store on site is equally impressive. They have everything you would ever need to own – and then some – branded with the Arsenal logo, very jersey, every kit, etc. Somehow I made it out without removing my wallet. I am already scheming a return next year.

If you’re planning a trip to see the Arsenal, reach out to me at the pub. Usually, American Gooners can gain access to tickets by becoming members of Arsenal America, but as in Kenan’s case, occasionally I can help rustle up some through my London network of friends.

Actually woke up this morning thinking Arsenal’s late winner over Newcastle had been a dream.

I got up and watched the last 7 or so minutes of the match again, so I could be sure.

Weekday matches are always a bit annoying to begin with, because it is a rare occasion when I can disappear from work for 3 hours in the middle of the day to watch them. Thus, my day is spent in a heightened paranoid state where I attempt to avoid all media, text messages, or contact with the outside world.

My coworkers, having previously been admonished, occasionally like to joke about revealing the result. I remind them that doing so, is a firing offense.  It helps that one of our partners is Arsenal born and raised and enduring the same ritual as I.

I end up watching over dinner with She Who Must Be Obeyed, who is a loyal Gooner in her own right, but I’m still a bit chafed at not having been able to watch live at Maggie McGarry’s Irish Pub with other Arsenal supporters. Short of being at the Emirates for the match, there is no place I’d rather watch than with the Bay Area Gooners. 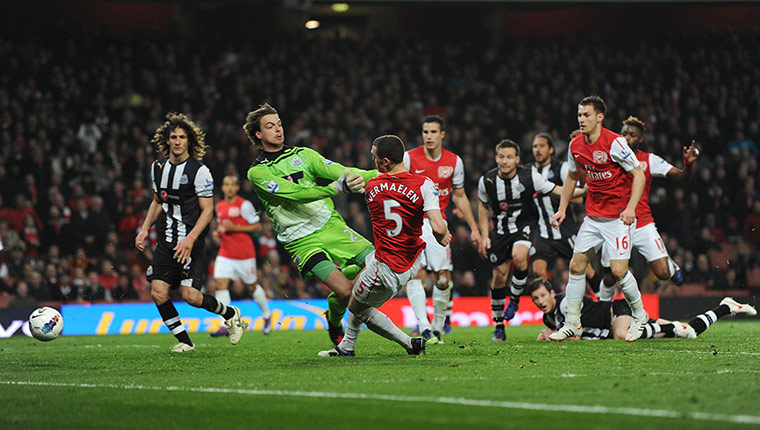 Vermaelen scored a dramatic winner as the clock ticked down. (Guardian Football Gallery)

Funny how a late winner will salve all wounds and make one forget the petty annoyances of the day.  A dream come true.

We knew it was a big ask.

Arsenal were headed into the second leg of their Champions League match-up with AC Milan, needing at least 4 goals without conceding one, to make up for the 4-0 debacle at the San Siro.

The Gunners fought fearlessly and valiantly, putting in 3 goals before the half.  But it was not to be.  Yet, as with other defeats, I do not feel despair, regret, or anger (though I must confess to a level of annoyance with the abysmal referee).

All that I’m feeling is…