Looks like I owe an apology to Ohio. My bitterness over the 2004 election debacle has caused me to be a bit dismissive of the entire state at times. However, after watching this video of Representative Marcy Kaptur, a Democrat from Ohio’s 9th District, addressing the House, I am humbled. Why isn’t this woman running for President? Thanks to CSPANJunkie for watching CSPAN constantly, so the rest of us don’t have to.

Today’s Carling Cup match at the Emirates had Sheffield United FC (one of my least favorite clubs) licking their wounds, and true Gooners licking their lips. The Young Guns demolished The Blades, 6-0, and moved into the fourth round. 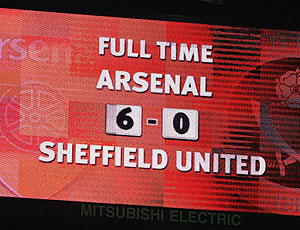 Fielding a squad with an average age of 18.5 years, Le Boss once again is using the League Cup as proving ground for his younger players. In fact, this was the youngest squad Arsenal has ever put on the pitch. The 18-man squad for the night was:

With complete disregard for the fact that I am shelling out 80 smackers a month for DirecTV for the sole purpose of getting to see Arsenal play, neither FSC or Setanta aired the Gunners match, with the latter preferring to show Swansea-Cardiff (are you having a laugh?!).

Carlos Vela scored a hat trick, Nicholas Bendtner a brace, while Jack Wilshire had one of his own. Despite it not being on the telly here, I managed to find highlights of the goals. 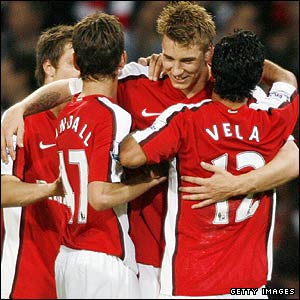 A great night for the youngsters! You’ve made us proud lads!

I was looking for a video of Generation X doing “Youth Youth Youth”, but all I could find was “Wild Youth”, which is also somewhat apropos.

Will wonders never cease? I mean, how often do we get to single out a Republican for their honesty? Really?

Well, Chuck Hagel, the United States Senator from Nebraska, and a senior member of the Senate Foreign Relations Committee, told the Omaha-World Herald, his party’s vice presidential nominee, Sarah Palin, lacks foreign policy experience and called it a “stretch” to say she’s qualified to be president.

She doesn’t have any foreign policy credentials,” Hagel said in an interview published Thursday by the Omaha World-Herald. “You get a passport for the first time in your life last year? I mean, I don’t know what you can say. You can’t say anything.”

Could Palin lead the country if GOP presidential nominee John McCain could not? “I think it’s a stretch to, in any way, to say that she’s got the experience to be president of the United States,” Hagel said.

McCain and other Republicans have defended Palin’s qualifications, citing Alaska’s proximity to Russia. Palin told ABC News, “They’re our next-door neighbors and you can actually see Russia from land here in Alaska, from an island in Alaska.”

Hagel took issue with that argument. “I think they ought to be just honest about it and stop the nonsense about, ‘I look out my window and I see Russia and so therefore I know something about Russia,'” he said. “That kind of thing is insulting to the American people.”

Thank you Chuck, for having some integrity. Given some of your positions on the war and immigration, as well as your sound assessment of the Bush Administration, particularly where you said, it is my opinion that this is one of the most arrogant, incompetent administrations I’ve ever seen personally or ever read about, you sure you won’t consider changing parties?