What a difference a week makes. Arsenal cruises past FC Twente 4-0 in the Champions League qualifier and moves on to the group stage, to face the likes of Dynamo Kiev, FC Porto, and Fenerbahce. Not an easy task and one requiring quite a bit of travel for the Gunners. But we’re into the next stage and that my friends, is all that matters at this point.

Then the weekend rolls around and the Bay Area Gooners down at Maggie McGarrys are treated to a 3-0 thrashing of Newcastle FC, and yours truly has to eat a wee bit of crow, as Emmanuel Eboue actually contributed mightily to one of the goals, and got a rare round of applause from the Emirates crowd. Could this be the start of a new Eboue, a player I was hoping we’d seen the last of? Ah well, let’s not get ahead of ourselves.

I was out and about Thursday night and saw an amazing performance by Shearwater at the Great American Music Hall (also very good was the opener, Wye Oak). Afterwards, as we were having drinks at the Edinburgh Castle, we crossed paths with a group of young tourists staying at a local hostel. Many were from the UK, so I asked the one standing closest to me who he supported and the answer came back Spuds.

So I opened my jacket, showed him my Gooners t-shirt, and all he could do was shake his head with a rueful laugh, saying he’d come all the way to San Francisco on holiday, only to find a Arsenal supporter standing next to him in the bar. One of his fellow travelers turned out to be a Chel$ki supporter, and they were hoping to watch the Tiny Tots-Chel$ki match this weekend. I directed them to Maggie McGarrys and wished them both a draw. Low and behold, the footie gods smiled about me, and it ended up 1-1.

I also watched another stadium event prior to going out on Thursday, taking in Barack Obama‘s historic acceptance speech. The past 8 years of the worst president ever tends to make one a bit cynical about the process, but this was a truly transcendent moment.

Naysayers will say it was short on substance, but I thought it was long on philosophy, and easily the best political speech, I’ve ever heard. As some of you know, I’m not easily persuaded by an Up With People moment, but surely we can all agree the political process has failed most of us, and a new approach is needed.

Then the next day, McSame picks a woman to be his Vice-President who doesn’t actually know what the job entails. In addition to her complete lack of experience, she’s a gun-nut, right-to-lifer, and a suck-up to the oil companies.

I guess the thought process, if you can call it that, is that she will galvanize both the women who would have voted for Hillary as well as the conservative douchebags that voted the current moron into power. I expect the latter group will fall into line, but I can’t see people who thought Hillary was the answer casting their votes for Barnacle Groans and Mrs. Shrill & Kill. However, one can never underestimate the stupidity of the electorate. Florida and Ohio, I’m calling you out. Vote Obama! You owe the rest of us, big time!

Are you sitting around soaking up the loss to Fulham, with doom and gloom washing over as the realization that this could be a far longer season than previously thought? Yes, yes, it’s only one match, but that’s how we roll.

Then read these two interviews and if you’re not well chuffed to be a Gooner, perhaps you ought to be looking for another club. There’s nothing particularly new in the Wenger interview, but it certainly reinforces the vision and principals that set our club apart from the others.

But the one that will make your heart swell to the point of exploding is the interview with Cesc. As I’ve said before, this kid is the heart of this club, and I actually felt a little weepy reading about his love for Arsenal. 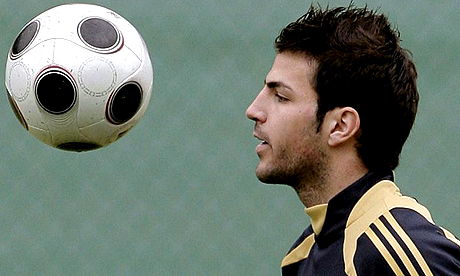 If I ever have a son, I hope that I instill this sort of character in him. And of course, I wouldn’t mind one bit if he played for The Arsenal.

Can I call you Arsene? No? Thought not. Well, I realize it’s early in the season and that the team is still settling in, but after the woeful display at Craven Cottage today, some of the faithful are just a wee bit concerned.

Yes, yes, I realize how presumptuous it is for me to question your plan for the club this season. Not only am I a Yank, observing things from the far side of the pond, but you probably have goldfish at home who know more about football than I do.

So it is with the utmost respect and deference, that I say, CAN WE BUY SOMEONE PLEASE! The Eboue as defensive midfielder experiment is to put it mildly, not going well at all. Denilson’s performance was so shocking today, we actually felt relief seeing Song coming on, only to see him come in for Toure.

Obviously, when Cesc comes back, things will improve, but where is our enforcer, our attack dog, our Flamini, our Vieira?

As the risk of behaving like a petulant child stamping feet, making demands from harried parents…

WANT A MIDFIELDER! WANT A CENTRE BACK! WANT! WANT! WANT! Ad infinitum. Holding breath, turning blue, and so on and so forth.